More Than Just A Party: The Cultural and Political Significance of Brazilian Carnaval

Ra ra ra! The United States’ biggest party just concluded. Every February, hundreds of thousands travel to America’s Paris to indulge in drunken debauchery, sexual rebellion, and unrestricted self-expression. By now you should know I am referring to New Orleans’ Mardi Gras. For those who attend the week-long celebration, Mardi Gras is a once-in-a-lifetime, unforgettable moment in time. But did you know there is a rival festa (party) that upstages New Orleans every year? The biggest party in the world, attended by millions, takes place at Brazil’s Carnaval. This year I took to this world stage with my CET groupmates. Follow my journey through the feather and glitter laden acts of Carnaval, deemed “The Greatest Show on Earth”, and you too will be saying ai, ai, Carnaval!

But first, let us understand the context in which Carnaval exists. Carnaval is historically a Christian holiday which originated in Europe. In colonizing the Americas, the Catholic nations of France, Portugal, and Spain spread the tradition here. Mardi Gras (French for Fat Tuesday) is the most famous Carnaval day, but celebrations are week-long. Fat Tuesday is given such a name because on it people ate and drank their body weight in food and alcohol. Why? The subsequent 40 days mark Lent, a season of abstinence from alcohol, meat, and sex. This practice commemorates Jesus’ 40-day trek through the desert. Carnaval allowed people to indulge those guilty pleasures in bulk and purge them from their system in time for holy reflection.

I don’t think this is how Carnaval is understood in the 21st century. In a few weeks, people will wake up hungover from St. Patrick’s Day parades and in 9 months, new Scorpio babies will be added to this world. The expectations surrounding Lent have not held up well. The meaning and significance of Carnaval have completely shifted from religious to cultural, as well as economic. But I am not complaining. I will not be the one to ask that we recreate Carnaval in its intended form. I very much like how we do it now and a lot of Millennials, being mostly areligious, will probably agree. Plus, the cultural and economic aspects of Carnaval are just as important and informative as the religious ones.

In fact, deconstructing Carnaval’s socioeconomic elements reveal that it has more depth than just alcohol, food, and sex – only adding to the fun (at least for my nerdy interests). Carnaval, both in its old and new forms, can be understood as offering a commentary on gender, race, sexual expression, and wealth. Because this is only a blog and not a dissertation, I will not drone on about all the intricacies but will cover some findings using my background in sociology, my Catholic upbringing, and anecdotes and observations gained while in Brazil. Of course, I must always recognize that I am foreign to this culture, so I am no expert.

Besides holding religious significance, Carnaval was a time in which society’s most marginalized could be joyous and freely express their feelings without controversy. Women could be in command of their sexuality and queer individuals could be out without fear. How was this possible in the Middle Ages? In an assessment of Carnaval activities, clinical psychologist Gayle Haynes says that the exaggerated masks and costumes of Carnaval were disguises that protected people from any social repercussion for their socially unacceptable actions. Sex in the middle of the streets or market was common. No one batted an eye at whether it was two men, two women, or five people.

Carnaval’s grandeur juxtaposed with peasants’ debauchery also served as a mockery of the establishment, according to Nadia Sussman and Taylor Barnes of the New York Times. Performances often depicted the rich being punished or simply acting the fools. In colonial Brazil, Carnaval festivities were open to free Blacks and slaves, who used it to criticize the system of slavery and their former masters. At Carnaval, all people were anonymous, autonomous and equal. 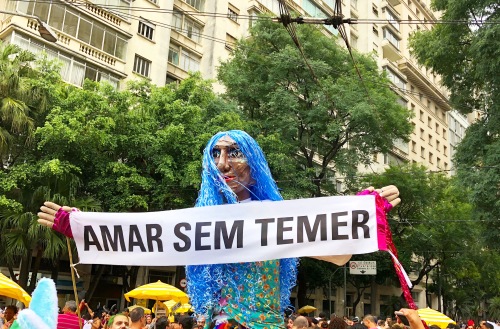 The liberal essence of Carnaval is unquestionably visible in Brazilian today. Bloquinhos (block parties), of which there were nearly 500 in São Paulo alone, are free-of-charge and open to all. The blocos are diverse and political. Signs and shirts centered around Black Power, consent, feminism, and queer liberation were all abound. The blocos themselves are themed – some of them around costumes, but many around cultural identities that are neglected by Brazil’s mainstream culture and government. My friends and I attended one Afro-Brazilian party with a pop-up thrift store that sold artwork and clothing. We also attended several queer blocos where butts, kisses, nipples, and open containers were aplenty.

While the bloquinhos are more representative of how the average Brazilian celebrates Carnaval, there is another common celebration that is marked with elitism: Samba parades. These parades are reminiscent of the U.S.’ Rose Parade. At large arenas throughout the country, Samba schools display floats and perform this traditional Afro-Brazilian dance for a shot at the top prize. However, the Samba parades are a manifestation of capitalism’s overhaul of Carnaval. Although Samba is an integral part of Brazilian culture, the parades are more open to foreign tourists than they are the general Brazilian populace. In a reversal of Carnaval’s original intentions, the Samba parades benefit the rich and further separate them from the poor.

The bloquinhos and parades exist as two separate worlds. Both the Brazilian public and private sectors invest millions into organizing and promoting the annual Samba parades. Accordingly, seeking a return on investment, the companies make entry prices expensive (often hitting $1,000 USD). In 2017, an estimated $5.8 billion were generated from Carnaval. The bloquinhos are meanwhile free. The parades are televised nationwide, but the bloquinhos are more likely to get airtime only if arrests occur. Samba is seen as high brow, but Brazilian funky, popular at bloquinhos, is looked down upon for originating from favelas (ghettos) and being comparable to hip hop. Groups have even petitioned it be banned.

The irony of this all is that like Samba, funky and much of the culture at bloquinhos has its origins in Black and Afro-Brazilian culture. I would not be surprised if in a few years funky is present at the Samba parades, considering that it is attracting significant attention outside of the U.S. and that what those running the Samba parades most seek is to attract foreigners. According to my roommates, funky is already undergoing appropriation by White artists born outside of the favelas as well, which means that it will soon be whitewashed enough for the consumption and validation of Brazil’s elite. It is what happened with Samba, which 100 years ago was illegal.

While Carnaval mostly benefits the elite, off of the backs of the Black and poor, Carnaval still manages to provide the most marginalized with some economic stimuli. The Samba schools provide inner-city and small-town kids with an escape from poverty. Outside of dancing, designing the clothing and floats also provides jobs. Discount shop stores like those along Rua 25 de Marco see upticks in revenue. Rua 25 do Marco is actually where I went to buy my 5 costumes for no more than $50. Street vendors also make money, although getting licenses is complicated and many unapproved vendors are often run out by police detail. While this is all good, it does beg the question of what happens after? In the months between the end of Carnaval and the beginning of pre-Carnaval in January, how successfully can individuals sustain themselves?

Carnaval takes place anywhere from mid-February to early March and while it officially runs from Friday to Wednesday (Ash Wednesday), pre and post-Carnaval activities make it a month-long celebration. The Samba schools turn their practices into shows and there are bloquinhos long after Ash Wednesday. White collar workers are off that Segunda (Monday) and Terca (Tuesday) and have a half-day on Quarta (Wednesday). Of course, blue collar workers and the unemployed don’t necessarily have that luxury and Carnaval is their period to hustle. With over 1 million foreigners visiting Brazil and 2 million people attending daily Carnaval activities in Rio de Janeiro alone, there is a lot of potential.

While large cities like São Paulo, Rio, Salvador, Fortaleza, and Recife are usually the center of attention during Carnaval, beach towns become an escape for locals. Carnaval comes at the end of summer, just before the school year starts, so many locals take advantage of this to have one last vacation and get away from the craze of Carnaval. The CET students, unable to do Carnaval everyday (yes we are young, but livers can only take so much), followed this lead and visited Ubatuba, 3 hours away. However, the craze of Carnaval was just as present there in the massive congestion and traffic we hit.

I was happy to be back from Ubatuba for the end of the Carnaval festivities. In all, I went to Carnaval five times and each outing felt more freeing and uninhibited than the other. I completely fell in love with the bloquinho culture of Carnaval. Regardless of gender, race, sexual orientation or background, everyone there felt and acted truly equal. We talked to, danced with and got numbers from complete strangers. It felt normal. Gender and sexual fluidity which still feels so regulated in the U.S. felt normal here. Carnaval felt like one giant middle finger to elitism and structure. This gave our drunken stupor some purposeful action. That is why Brazilian Carnaval is “The Greatest Show on Earth.” No longer do masks and performances hide our real identities, but they are rather used to  amplify our true colors.